5 years in the smartphone industry

5 years ago, in July 2010, I made a bold prediction that Microsoft would purchase Blackberry.

At the time, Blackberry was still the clear leader, with over 40% of the market: 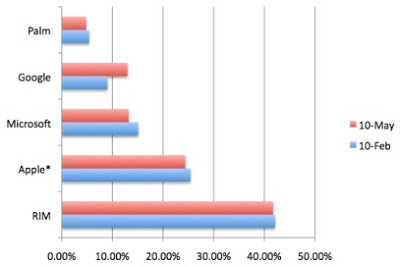 Even then, however, the trend was crystal clear. Apple had already caught them off guard, and Blackberry was slowly bleeding away market share.

Meanwhile, Android was gaining quickly at everyone else’s expense. Just look at the monthly increase in the graph above.

At the time, it was obvious to me that Microsoft and RIM needed to combine forces if either one was to stand a chance.

Instead, in 2013⁄2014, Microsoft bought Nokia – one of the few phone companies in worse shape than Blackberry. Predictably, this turned out to be a dismal failure, with Microsoft writing off $7.6 billion.

Meanwhile, the market shifted much faster than I ever could have predicted. 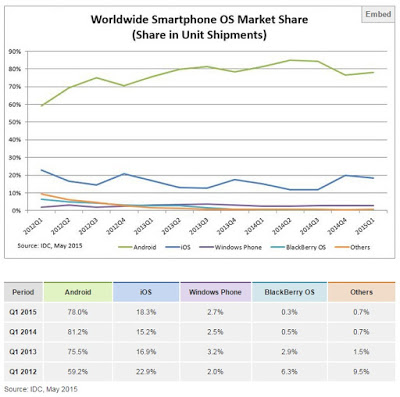 Recent charts show them as a minor rounding error, lumping them in with the “Other” category.

Windows Phone also dropped significantly, and continues to falter and flutter in the wind.

So I was quite wrong about this prediction, and also completely underestimated how quickly the landscape would change.

Would Microsoft and Blackberry have fared better had they merged? Probably not, but it would have made for some interesting business school case studies.

In the meantime, what does the next 5 years hold for the smartphone market? Will Android continue to dominate? Will a new contender appear?

Or will there even be a smartphone market in 5 years?

Perhaps we will all be sporting variants of Google Glass 2.0 :-)