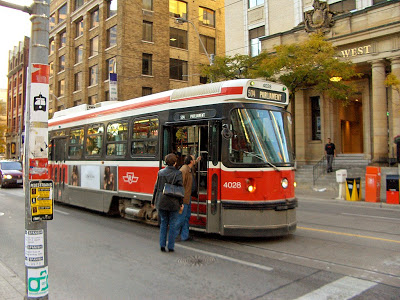 Your streetcars have always caused me a lot of grief.

First, their schedules are so inconsistent. You don't see any for a half hour, then there's like 3 in a row.

Second, they're slow. Like, really slow. The east-west routes on busy streets are often much slower than walking at times.

Third, they're dangerous. You often have to cross a lane of traffic to board and disembark, so you risk death quite a lot.

These problem have existed for decades, and nobody seems to care.

1. No street parking on main routes.

Toronto is not (supposed to be) a pissant little rural town where you just drive in and dump your car on Main Street to visit the General Store.

The never-ending stopping and parallel parking causes so many problems, it's ridiculous.

This is supposed to be the downtown core of a "world class" city.

Park those cars on side streets and in parking garages, out of harm's way.

Now that you have a second lane you can actually drive in, restrict the transit lane (the one with the train tracks that's annoying to drive in anyways) to trams, buses, and taxis.

Paint it blue, and put little train pictures on it.

Make a hefty fine for abusers (to supplement the revenue loss from the street parking).

This is what real cities do to keep people moving, instead of idling, yelling, and swearing at each other.

Bonus tip: Consider a bike lane or two while you're at it. Right now your bikes are all over the place, conflicting with both street traffic and pedestrians.

3. Make the streetcars safer to ride

Your only current protection from death when exiting a streetcar is a tiny little stop sign on the door -- after the door opens!

I don't know how many people are injured or killed this way each year, but I can say that many people very nearly get schmucked approximately every 3 minutes.

And it usually leads to lots of dinging, honking, yelling, and swearing.

All of which are easily preventable.

Long term, you need to either:
1. Move the streetcar lanes to the outside lanes (best solution) or at least
2. Make way more of those safe "islands" for people to wait at and exit to.

In the short term, at least put some bloody red flashing lights on the back (like a school bus) so drivers behind realize when to stop.

That small change could save both rider's lives, and help stupified out-of-town drivers that have no clue when they need to stop.

So there you have it. Toronto could improve its streetcar situation by about 300% by:
You're welcome. :)
<< Dear younger generation... :: Copycat, copycat! >>